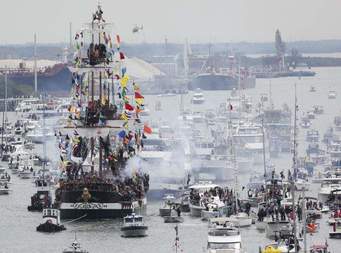 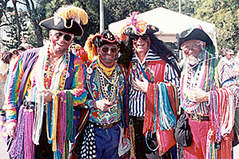 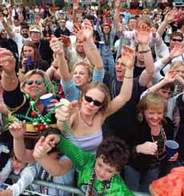 A cannon blast rocked Nic Andreas, pushing him forward, making his feet leave the ground, and his pulse pound.

But, only for half a second.

Nic quickly regained his footing, shook his head, fighting back a grin. After all these years, those damn pirate cannons still caught him off guard. Even though he knew they’d be coming. What the hell? Too jumpy today.

Nic laughed at himself and continued pushing his way through the rowdy crowd on Bayshore Boulevard lined up to watch Tampa’s annual Gasparilla pirate parade. Laughing felt good. Helped release some of his built-up tension.

Crowd was bigger than he remembered. But, it had been over a decade. Had to be over a hundred thousand people watching. Some were on the water, part of the annual watercraft invasion on Tampa Bay. Others were on land, eyeing the pirate parade from Bayshore Boulevard.

He shaded his eyes. The bright sun backlit the Jose Gasparilla pirate ship, making it dark and menacing at the dock. A confusing twist of emotions squeezed him. He cocked his head, blinking a couple of times. The world’s only fully-rigged pirate ship had been even more intimidating when he’d stared up at it as a kid. Now, the polished vessel only served as a reminder of a rocky past. His rocky past.

Nic turned his back on the Jose Gasparilla.

Last time he’d been here, he’d been shivering and dressed in thin, Goodwill layers during a chilly January morning. But today, the rays from a roaring sun toasted his skin, the breeze from the bay blowing enough to make it about 75 degrees and perfect. Probably why people were lined up six to ten deep in places.

The smell of gunpowder mixed with sausages, peppers, and fried onion rings made Nic’s stomach roll. He wasn’t sure if it was from the combination of smells or the fact he was returning home with a risky assignment: infiltrate the Calabrese family and extract information while undercover.

He stopped in the center of the sidewalk, despite the elbows and arms still pushing and nudging at him, and closed his eyes, visualizing himself as a small boy, standing right in this very spot, right outside the grand Calabrese estate, right across from Tampa Bay. The rat-a-tat- tat of a passing drum line, and the whooshing sound of rainbow colored beads being tossed over his head, touched off a sensory over load of childhood memories. His heart started skipping. His breath hitching. It’s not too late to turn back. You can abort. No one would blame you.

Someone shoved past Nic, elbowing him so hard pain shot through his middle, thrusting him back into the present. Nic sucked in air and opened his eyes. Scanned the crowd. No one threatening next to him. No eyes on him. No gun pointed his way. He exhaled. Just men wearing colorful tunics and loose baggy trousers, and women in sexy short skirts and decorative pirate hats, laughing, drinking, loving life, oblivious to the war of worries going on inside Nic’s head.

A little boy, who couldn’t have been older than five or six, caught Nic’s attention. The kid was jumping up and down, trying to see above the crowd. Beads flew over the kid’s head, and the boy kept reaching up, but each time a necklace would fly his way, someone taller would grab them. The boy stomped his foot and shoved at the adult in front of him, trying to get through. No one budged, or even seemed to notice the kid.

Nic chuckled, the distraction slowing his erratic heart rate. He remembered the excitement that had raced through his veins when he’d been that age, even though he’d known he’d get his ass beat if his mother ever found out he’d escaped their small-as-hell servant’s quarters at the back of the Calabrese estate and had run into the crazy crowd looking for adventure and treasure.

Mom had despised Gasparilla. She’d always had to work overtime during the annual Calabrese party, and the whole thing used to wear her out.

Nic walked over to the boy, and swooped him up, throwing him onto his shoulders.

The boy stiffened at first, probably because his mother had warned him about talking to strangers. Good. But as soon as the beads started whizzing by, the kid started grabbing a stash of his own.

This is not what you are supposed to be doing. But, Nic couldn’t help himself. Would have been nice to have a father to lift him onto his shoulders and help him see the parade all those years ago. He shuddered. Keep it together today, man.

“There you are! Oh, my God, I’ve been looking for you, Anthony.” A woman, with frantic, wide eyes and smeared makeup, pulled at Nic’s arm reaching for the boy.

“This your son?” Nic yelled above the crowd, quickly taking the boy off his shoulders and placing him on the sidewalk next to the hysterical woman. Who smelled of beer and sweat. I remember that smell, well. . “I was just helping him stay above the dangerous crowd and maybe get some beads.”

She immediately wrapped her arms around the boy. “I just turned around, and he was gone.”

Nic nodded, remembering how easily as a child he’d been swept away by the crowd. Most parents wouldn’t dare bring their kids to the adult parade.

“Mommy, look.” The boy wrestled out of his mom’s hold and punched up a fist of multi-colored necklaces. “I got beads! Lots of beads!”

They were dripping over the kid’s chubby fingers. Nic smiled. Amazing how the cheap multi-colored beads could thrill kids.

“Anthony, you scared me.” She shook her son by the shoulders. “Please don’t ever do that again.” Then, she pulled him back into her.

Something about that hug, the way the woman was crying, looking as if she’d die right there if her son had been hurt or lost, made Nic’s heart ache. Mom had had never hugged him like that. No, when he’d gotten lost and returned finally to the maid’s quarters after the parade, if he didn’t get his ass beat, he was ignored by the tired, weary woman who life had hammered down.

“Thank you.” The woman looked at Nic with both gratitude and concern. After all, she didn’t know Nic from Adam. She picked up her son, arms tight around him, and disappeared into the parade crowd.

When she moved out of the way, Nick found himself standing right in front of the walkway entering the Calabrese mansion.

He planted his feet, brought his hands to his hips and stared down the walkway of the estate he once called home.

His pulse beat at his temples, making his vision go a little blurry.

Buzzing filled his ears, blocking out all other sound.

The weight of his history here had his arms and legs feeling heavy. It wasn’t just his conflicted feelings about being here after being tossed out on his ass so many years ago, it was also his indecision about taking down Marco Calabrese. Because, to achieve that goal, he might have to hurt Carla Calabrese. Hell, he might have to arrest her, too, depending on what she’d been doing with her life since he’d last seen her. Last kissed her. Last …

Nic exhaled, shaking away that memory, taking the important first step through the fancy wrought iron gate and onto the vast and much envied Calabrese property. The annual party was well underway. He’d get lost in the crowd easily thanks to the ridiculous red pantaloons, makeup, and pirate patch he’d put on. Perfect day to return - undercover. And yet - in plain sight. He swallowed. But, nothing went down.

No turning back now.

Time to get to work.

The Launch of Flatline

Why I jumped out of a perfectly good plane.